Happy Friday everyone! Sure hope that YOUR day was fabulous! It was a rainy and dreary day and actually pretty uneventful.

I was sposed to go to Knoxville and decided to put it off for a day or two. I did, however make it to the grocery store and made a fabulous pot of brocolli cheese soup for dinner. I read the People Magazine cover to cover. I NEVER do that. But of course I bought it for the story on Patrick Swayze and of course my other heart throb Matt Damon was in there announcing they are expecting another baby. Awwww. So between the articals of Britney and who was knocked up, knocked out and so on...it was inspiring to read articles of real moral people. Ha! Whod have ever thought theyd be the minority in life.

Anways, we are hoping to spend the night curled up with popcorn and movies. Awww gotta love Fridays!

I know I have told ya to pop on over to Lysa's blog before...but I gotta tell you today she has lots of posters that are offering uber great tips on organization. WOW! I learned so much just by scanning. I cant wait to post my two cents so I can go back and read some more.

Todays post is all about organizing. Where do you stuff stuff when you have last minute company coming? And a special organizing tip?

As far as stuffing...gosh that one is a tough one. It used to be my garage, but since that is now a renovated space its not up for game. But I would have to say my guest room? Unless the company is coming for sleeping. Then I gotta go with my room. Afterall, whos gonna go in there anyways????

OK...so this is my book of words. I have written all sorts of things in here. Everything from things the girls have said, to signs that I read at Churches...to cute little throw pillows and such in magazines. Its just a simple composition book that I covered and decorated. How bout you? Whats your tip for the day?? 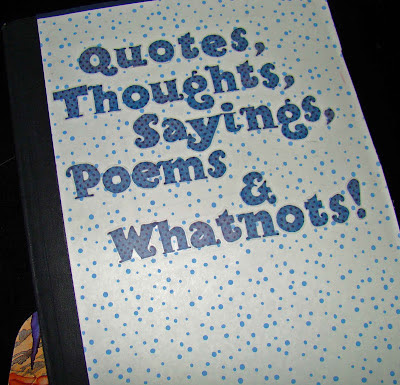 Love that organization idea. I like to keep quotes also. Your blog is so nice- very neat picture and title!

Have a great weekend,
Jenny

I visited your blog from Lysa's linky thingie and after looking around a bit fell in love with it. I'll be adding you to my favorites for sure!

Hey there Sweet sister....As always I enjoy visiting your blog. Have a Wonderful day in the Lord. ((((Hugs)))