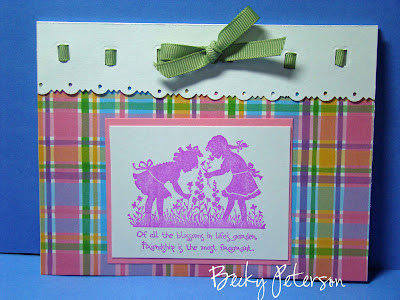 OF ALL THE BLOSSOMS IN LIFES GARDEN, FRIENDSHIP IS THE MOST FRAGRANT.


Its Monday once again. WOOHOOO! My last peaceful Monday I might add too. But I am anxious for the girls to be out of school.

The party was a huge success. When I went to bed at 2am they were still singing. I figured it was cold enough outside that they wouldnt be up and moving any so I was safe to head to bed myself. They had a great time and everything was perfect, despite my stressing before the party.

R and I's weekend was a bit more stressful after we dropped the girls off at Grammee & PawPaws on Saturday. We had decided that since we were going right by the Motor Mile, we would just stop by and see a few cars. We werent in a hurry and car shopping is MUCH easier without children. Well the first lot didnt prove anything. We didnt find a thing there. But during this time, my car is getting harder and harder to stear. Like the power stearing fluid is gone. Even though R checked it and it was full. Well just a little ways down the road the car was taking all that he had to drive. We decided to turn around and go back to PepBoys where I had just had tires put on it last week. They obviously had done SOMETHING to it!!

The series of events to follow SHOULD have told us to return home. They said itd be an hour before they could even look at it. Okay...so we walked somewhere to get lunch....the first place said...no, they werent serving lunch today that they had a private party. So we walked some more. Lunch was good once we finally found a place. We even saw Marty Stuart (country singer) eating there!

While dining we got the call from Pepboys that told us the great news that the undercarriage that was holding my engine in place was broken and that the car was absolutely NOT safe to drive. Theyd have to order the parts which of course wouldnt be in until later this week. I was sooooo grateful that R was there tho. Because for one, I couldnt have driven the car. I surely would have wrecked it. And for two, he made them prove that the problem was not something they had caused.

Moving on to the next event. We are searching for a rental car. Of course no place in town is open on Saturday. (HOW CRAZY IS THAT???) We find out at that we have to go to the airport to get one. Greeeaaaat! We then call a taxi to come and get us. Get the taxi. Go to airport. Go to the first window. Set it all up and the man says he needs a major credit card. *gasp* We dont HAVE a major credit card. We dont OWN one! OK...so move on to the next window....start all over again.

Finally get a car for the weekend and once again we are on our way out of town. There is construction all of the way up the mountain. People EVERYWHERE!!! It was crazy hectic. We FINALLY get up to Harrahs at about 730 pm. We decided to go ahead and go play for awhile....deciding that wed get a hotel when we left. HA! Mistake number 5 gozillion! We lost our butts at the casiono. Not a HUGE deal since we only take what we can afford to lose. We had a humongous breakfast buffett at midnight. It was great food, but at midnight???? I would surely be in a coma! We finally left there at 3am. Ronnie just kind of nonchalantly asked the valet if he knew of a hotel. To which we got the grand news that most everyone was booked up. *gasp* Giving us a printout of the local hotels with their phone numbers. Trying to call and find a room. Three phone calls later...we decided just to drive back home. We got home at about 530am yesterday morning. Miserably tired.

It certainly was a weekend that we wont forget too soon. Not exactly the time of our life. But we did enjoy being together.

I hope and pray our week proves to be more easy going. This is truly an example of what happens when you dont listen to Gods little hints that youd really oughta go back home.

Cute card! I can't wait for my kids to be done with school too ! But we have until the first week of June to go!

Oh man, sorry about the car mishaps! Wow...glad you discovered it before anyone got hurt! Good luck with repairs/searching for a new one!

My goodness, that IS one heck of a weekend! :-( Sorry you had to go through all that, but so glad that you made it through in one piece. ;)

I'll be praying that all goes well from here-on-out.

I'm so glad the party went well. I could tell you had put alot of thought into it. Sounds like the girls had a GREAT time..singing until 2am..that just spells F-U-N!

Sorry you guys had such a hectic time with your car.
But, walking down the road together with no particular agenda sounds romantic to me. You also saw Marty Stuart..that's purty cool.
Then you made it to Harrah's...lost a little moolaa..but not to worry, you knew what you could lose. Then that wonderful midnight breakfast! YUM!
Even though you had your share of mishaps...it sounds like a pretty wonderful weekend with your hubby to me! It would have been nice if you could have found a hotel though!! GEEZ!! 5:30 in the morning just STINKS! I bet you guys were completely worn out.