This is a challenge layout that Brandy on my Tennessee Stampers board posted for us to do last week. I have created a couple of these in my version, but I want to see YOUR version of this layout. GO--create one of these and send me a picture of it. I will then pick one of the submissions to win an awesome package of embellishments. I encourage you to enter! I encourage you to tell your friends to enter! Whether I know you or dont know you...please please send me your card pic! 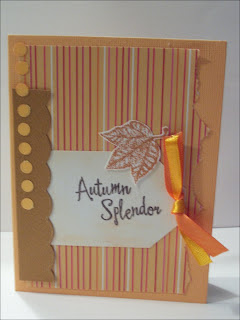 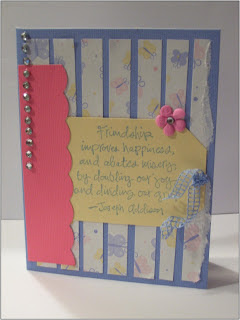 As most of you know this has been a crazy crazy week for me! I went to the Tennessee Stampers retreat over the weekend and had the most fabulous time! I REALLY REALLY enjoyed the trip. I loved meeting all of the people and I really liked learning the new techniques. It was an awesome whirlwind trip. I met the most fantabulous bunch of ladies. I could spend hours going on and on about each one. I am blessed to have such great friends.

I was struck with a toothache while there (of course) so that hindered me just a bit. But I hung in there. My poor roommate had to deal with me up and down all night long though. I know she suffered from sleep deprovation too.

Had a great trip back, stopping by the Russell Stovers Factory and of course lunch. We dillydallied all the way home trying to stretch out the trip as much as we could. Though upon returning I found little Hannah on the couch with ice on her ankle. They said she had fallen down and twisted her ankle. I seriously thought nothing of it. Being that she was 5 and in Grammee's care she was doing her best to get as much attention as possible. But when I asked to see her foot she litterally screamed! A blood curdleing yell. I loaded her up and took her straight to the ER. My stamp stuff still packed in the back seat and stuff still every where. They Xrayed her foot over and over and only by the grace of God did one of the photos show the bottom of the break. It was further up in her leg. They freaked me out when they said that they were waiting to hear back from the Ortho Surgeon. WHAT?! Surgery??? HUH!? They had decided that she would not be taken in that day for surgery but that she needed to see the surgeon the next day for a follow up. So they put a temp cast on and sent her home. 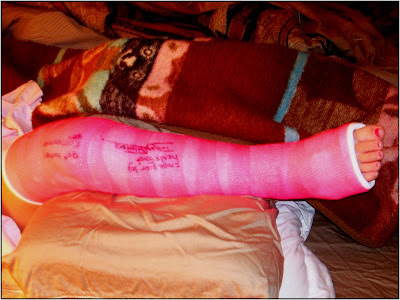 Of course being a little girl she had to pee before we were able to get home. I took her to Krystals. Screaming the entire way in and out. I know everyone there had to think that we were just torturing her. Our first night was pretty much that way all the way through. She did have pain medication but it just dulled the pain. It was heart wrenching.

Another panic attack the next day when I called the surgeon and they told me they had already been booked solid until Friday. I just knew she couldnt make it until Friday to see the doc. PRAISE GOD they were able to look at her xray and decipher what she needed. Told me if I could be there within an hour theyd get her taken care of. So another drive to Knoxville...me, partially thrown together, and Hannah in a dress (thank goodness once again that she is a girl). They showed me the xrays and she did what they call a twist fracture. Where she pretty much just twisted her leg until it snapped. I am not sure where and when the dog came into the picture. If she twisted her leg and he ran over her or what. But they said it was broken at a diagnal which was a good thing because there was more bone to heal and bond. She indeed did break it all the way through, but no surgery was thought to be needed and she truly should be ok. BUT, 2 weeks of a full leg cast and then switching to a half leg cast for 2 more followed by 2 weeks of still no pressure.

Her first 2 nights were MISERABLE! We barely made it 3 hours between screaming fits. But, last night was a dream! All night! She slept all night! She is slowly regaining her talking and returning back to the real Hannah.

My sister in law came in yesterday and cooked us a fabulous dinner. I was so grateful for her. It was a good distraction for Hannah too. And of course my mother in law has been awesome too.

I, am doing ok. I still have a tooth ache, but by the grace of God it has been manageable. I went to court yesterday for my traffic violation. Got a whopping fine, and have to go to class, but thank goodness that is it. It is wiped from my record. YIKES!

All in all we are hanging in there. I will post more about my retreat in the upcoming days. I truly had a great time and really enjoyed myself. I will start posting more about it as I find myself and my brain. Oh yeah, and unpack my stuff out of the car. Its still out there.
Thank you everyone for your notes, emails, cards and calls. Its soo good to have friends.
Much Love,
B
at 10:29 AM