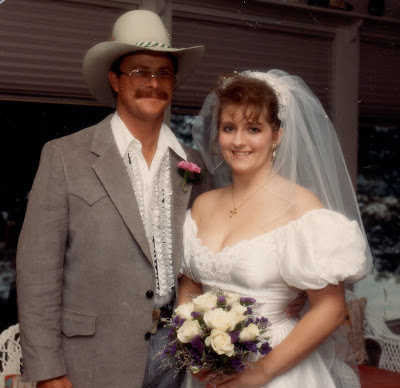 Hi friends.
I just recently learned that my stepdad was in a serious accident last week. This is the last photo I have with him, tho I have changed a lot, he hasnt changed any. Please join me in prayers for him and his wife, Donna as they have a long road ahead of them.
Here is a recap of what happened, taken directly from the family's website:
On Monday morning Joe went up to meet some of his buddies who had been camping. He set his foot in the stirrup at 6:30 am, and made the 20 mile trip to camp in time to have breakfast with his friends. They all rode out together on a trail with a steep decline. During the decent, the mule that Joe was riding got spooked and started bucking. We now know that hornets were the cause of spooking the mule, due to finding stings under the mule's belly. The mule bucked right off the trail down a very steep hill, and Joe remained on the mule gaining control of the situation during their rapid decent of about 300ft. As Joe regained some control over the situation the mule planted its front legs, and stopped abruptly causing Joe to fly over the mule's head and landing on his own face and having his body continue the motion over his own head. Joe remained conscious after his fall, and was able to talk to his buddies who reached him quickly. He could not move his hands or feet, and complained of immense pain in his neck and right shoulder area. Fortunately, there were many people out hiking, mt. biking and dirt biking in the area because they provided much help and assistance in saving Joe. A rescue helicopter was called and directed into the area, and these strangers helped each other carry Joe on a back board 500 ft. up the mountain side to a place that the helicopter could load him up. THANK YOU! to all these wonderful people.
Joe arrived at Eastern Idaho Regional Medical Center in Idaho Falls, ID around 3:30 pm. Due to his injuries his breathing was difficult, and that was stabilized as soon as he arrived. Tests were conducted, and it was determined that Joe's neck had been broken at C6-7, and that the C5-6 vertebrae were unaligned and that the spinal cord was damaged. The doctors reported that Joe's neck would need to be realigned and fused. Surgery was done that very night, and was completed around 9:30pm. During surgery the doctors successfully realigned the vertebrae and discovered that while the spinal cord was damaged, the damage was less severe than feared. Due to the swelling of the spinal cord, it is not entirely clear whether it has been severed or only bruised, but it is clear that it has been drastically stretched causing enough damage alone.
Joe opened his eyes that night just before 11pm while Donna and her daughter Mary were there. He recognized them both, and was able to blink once for yes in response to their questions. He was given more pain killers and sedatives to help him peacefully rest the remainder of the night.
Bottom line is Joe has been badly hurt, and will be paralyzed for some time. However, he is receiving treatment to help his healing at EIRMC, and will be transferred to the Craig Rehabilitation Center in Denver, Co very soon. There he and Donna will both be cared for and treated through the physical rehab. Family and friends remain hopeful that Joe will be able to walk and ride horses again - one day. The goal is lofty and huge, but everyone is willing to work very hard with Joe and Donna to make it a reality.

We serve a BIG God and He can do anything...my prayers are for you all!
Debi Nicol

My thoughts are with Joe and your family.

Becky,
My prayers are with you and your step father, I know what prayers can do so I will being praying he is fine.

Prayers for your stepdad Becky and some {{{HUGS}}} for you too. Hang in there...

Oh my goodness, Becky -- I am so sorry that this happened to your step-father! I am praying for God's healing for him and for strength for your family. HUGS!

Oh Becky, big hug and prayers are send your way...... have faith. A friend of ours broke his neck this summer and he is walking.

PS: that is an adorable picture!